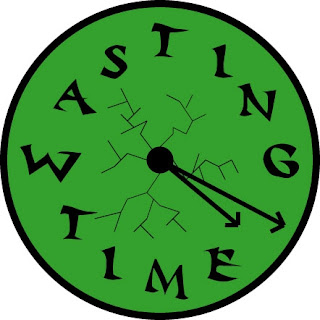 Something I have been really noticing a lot lately is how few people actually take action and follow through when it comes to creating their own opportunities.  One of the most common excuses people have is that they "don't have time...."

Personally, I think that's a load of crap.

This is especially bad when it comes to students (but it applies to everyone!).  Now I know I'll probably offend some people by saying this, but students (again, not just students) are notoriously bad for mismanaging their time.  I understand the workload that goes in to being a student.  After all, it wasn't too long ago that I was a student and totally guilty of this myself.

When people say pull the "I don't have time" card (boo-hoo), what they're really saying is "I don't use my time wisely" or either "I choose not to make time because this isn't important enough to me."  There are very few people that actually would admit the latter.  Tons of people talk about wanting to get more gigs, but very few honestly put forth the effort of actually doing something about.

So for those of you interested in ever making money as a musician, which is it?

A true lack of time (don't care enough to make time) or are you just not using it wisely?

It's an important distinction to make.

One last thing that I think a lot of people have trouble with when it comes to actually comes to taking action is fear.  Now, I am by no means psychologist, but I do know from personal experience that one of the biggest things for me to overcome was my fear of putting myself out there.  It took me months to start this blog, and it took me over a year to legitimately start a group.  I still have trouble with it almost every time I go to make a new post that I know will probably (definitely) be criticized by some of my colleagues.  I can't tell you how many emails of mine have probably been deleted and just blatantly ignored when I'm trying to drum up some work for my group.

But when it comes down to it, these fears of rejection and failure are really pretty silly.  I have to say that I made it way more difficult for myself than it actually was and I have a good hunch that it's pretty universal.  Imagining the worst-case scenario makes these fears seem pretty petty.  The worst that could possibly happen is not all that bad.  There are millions of people that won't be able to eat or drink fresh water today in the world, and yet I'm sitting in my bedroom worrying that people won't want hire my brass quintet.  I think we could all agree that being rejected and failing are not actually a big deal.

I've been harping on this for weeks now, but I really hope that some of folks out there start taking action and acting on your ideas.  It's really a been a tremendous learning process for me and I know that it has offered valuable lessons to everyone else I know that regularly puts themselves out there.  Don't keep putting it off until "eventually".  That's bullshit and you know it.  There are people that go their entire lives putting things off and their whole lives go by and they never took a risk.

It's not that bad, I promise.

What's holding you back from something you want to do?

What works and what doesn't. Find a niche.

Hi everyone, it's been a few weeks since my last post.  I hope some of you are finding the recent information/resources useful!  Feel free to contact me anytime with feedback or if you'd like advice on anything.  My email:  hanes81@gmail. (don't abuse it, please!)

Anyways, I've been thinking a lot lately about how I can approve my approach to the ever daunting task of becoming a "professional musician".  I tried the "appeal to everyone all the time" approach with my brass group and I can say with 100% confidence that is does not work.  I seriously sent about 500 emails out to churches and wedding planners alone.  The original intention was to drum up some wedding gigs for me and my friends to generate some cash.  Care to guess how many of those we've gotten?

Zero.  I have literally no wedding gigs in the books for my group.

Now, before I throw a pity party for myself, I will point out that we have actually managed to get a handful of other gigs that have been great.  I have recently been reading a lot about strategy and how to successfully identify what works and what doesn't.  With this in mind, I encourage those of you trying to figure out what your next move is to explore the marketplace and find a niche you can fill.  Really invest some time poking around the internet learning about what others are doing.  In the process of this, you will slowly but surely start to realize what ISN'T being done.  Once you can start finding these gaps in the marketplace, you can really start getting an idea of what you can do to fill in the blanks.

I understand that this will be very difficult most of us creative folks.  I've said this many times before but it's worth repeating:  Take advantage of the lack of action in others!  There are opportunities out there just waiting to be created.  If I had to guess, I would say that most of the people reading this will do absolutely nothing that I encourage my readers to do.  This totally fine, but I really hope that some of you really do get crackin' with this stuff.

Again, please let me know if there is anything I can do to help any of you.  I'm really interested in this stuff and get really excited when I have to opportunity to help others start this process.

One thing I wanted to share this time is an interview about business stuff for creatives with Ramit Sethi and Chase Jarvis.  It's about an hour and a half, but well worth the time.  While you're there, take a look at other episodes on Chase Jarvis Live.  They're all really great!

Thoughts from the back row

About me and the blog.

Hey.
I suppose this is the place on this blog where I might talk about how amazing I am and why you should listen to me.
I won't do all that, but I will say that I'm a classically trained horn player who loves music, but also loves things like marketing, reading, and learning about what makes life truly awesome.
This here fancy-pancy blog is where I talk about things I'm interested in and do my best to provide genuine value to the readers.
If something I say inspires you, offends you, or just tickles a fancy of yours, I'd love to hear about in the comments, or you can email.
Enjoy!

Interviews I've done with people way smarter than me.