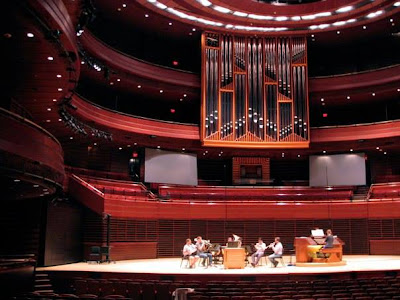 Well, it's been a few weeks since I've written, but it has certainly been very eventful month!  This past weekend my quintet had the great opportunity to perform in Verizon Hall at the Kimmel Center here in Philly.  We got to play for about half an hour on stage with (I think) the largest concert hall organ in the country.  Yes, it was totally bad ass, and no, we did not get paid.

Doing gigs for free is something that I've noticed can be a tender subject for a lot musicians (especially young musicians).  Personally, I have no beefs with doing things for free and I think people need to be a little more open to things before making judgments because it's "free".  Obviously you don't want to waste your time on a crappy gig that doesn't have anything to offer you, but I can think of a lot of examples in my own short freelancing career where a volunteered gig has led me to paying work.

Here are a few factors I take in to consideration when asked to volunteer my services:


I know some people (a lot more than you would think) that only want to show up and play when they're getting paid.  That's fine and dandy, but I think people are a little delusional about starting out careers in music.  I'll say it again, if I only played when I was getting paid, I would not playing much at all.  That would be totally lame.

Obviously every situation is unique, but I really think people should open up a little more to the idea of volunteering their talents.  For example, if you're a wanting to start a group that does wedding ceremonies, you'll find that it is incredibly tough to cut through the mobs of ensembles doing the same thing.  Would it be worth the time to volunteer your group to play at a local wedding showcase?

Absolutely.  If it means an opportunity to prove yourself and legitimize your abilities to someone who could potentially pay you, then it is absolutely worth doing.  Keep an open mind with this and always be on the lookout for the next opportunity.

I'll leave you with a quote from my friend, mentor, and former teacher Jeff Lang that I think is an important thing to keep in mind:

"It's not about being in the right place at the right, but being some place all the time."
Posted by Unknown at 11:23 PM 2 comments:

Thoughts from the back row

About me and the blog.

Hey.
I suppose this is the place on this blog where I might talk about how amazing I am and why you should listen to me.
I won't do all that, but I will say that I'm a classically trained horn player who loves music, but also loves things like marketing, reading, and learning about what makes life truly awesome.
This here fancy-pancy blog is where I talk about things I'm interested in and do my best to provide genuine value to the readers.
If something I say inspires you, offends you, or just tickles a fancy of yours, I'd love to hear about in the comments, or you can email.
Enjoy!

Interviews I've done with people way smarter than me.